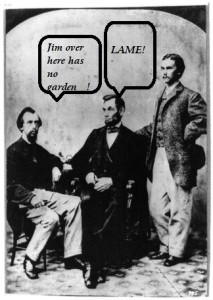 A couple of years later at what would be his last speech to congress (due to his unexpected assassination); President Lincoln proudly stated “The Agricultural Department, under the supervision of its present energetic and faithful head, is rapidly commending itself to the great and vital interest it was created to advance. It is precisely the people’s department, in which they feel more directly concerned that in any other. I commend it to the continued attention and fostering care of Congress.” Continue reading